At some point in our ‘playful’ abuse of the dog this week – I think we were once again testing her intelligence by throwing a blanket over her head and seeing how quickly she could shake it off – we realized that she is multi-lingual. 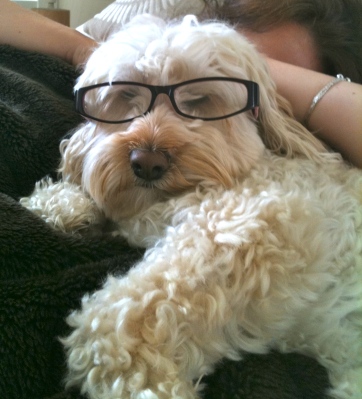 It was while attempting to converse in Franglais with my daughter, in preparation for her HSC trial, that we inadvertently discovered the linguistic genius of our third (did I mention ‘favourite’?) child, and promptly sent off her application to Mensa.

It all happened so quickly. One minute I was attempting to conjugate a verb-less question in appalling year 5 French, and the next minute, my daughter, who was appalled by my linguistic ineptitude (and to prove the point that the dog is more intelligent), began conversing with the dog.

Being a ‘hoodle’ (half human, half Spoodle), we’ve always known that it was only a matter of time before our little ‘prodigy’ communicated to us the true extent of her intelligence. Obviously, she has played it down to protect the self-worth of her older siblings until now, throwing us off the scent by chasing invisible balls (another favourite game of ours) and head on collisions with glass doors, but with her German ‘pudelhund’ (poodle) roots and the breed’s historic favour in the court of Louis XVI, her true European pedigree was never seriously in question.

Designer dog! Phhh! We’ve already arranged the fittings for her fiberglass space suit and as long as they can provide freeze-dried Scooby snacks, her first mission will be ‘one small step‘ for Spoodles. I can envisage the headline already: ‘Spoodle Still Searching Ball On Moon’.

So far we have discovered that she is fluent in French and proficient in German. She sits when we say ‘etre-assise’ and comes to us when we say ‘kommen hier’. Unfortunately, as with her mother tongue, she has yet to understand ‘stop farting’ in either language.

Just imagine how effective she could be as a spy, if she were ever dropped into France in the event of another World War.

The Top Ten Smartest Dog Breeds In The World

How Smart Is Your Dog? Give Him An IQ Test

I just want to say that there are good people in this world. Just met my new, forever hairdresser, a special needs mum like me, who kindly gave me a complimentary blow dry and made my usually over-bleached, dry, thinning hair look amazing! @thegalleryofhair #hair #faithrestored #style #kindness #passingiton #grateful #specialneeds
Sydney Writers Festival. Got to stalk my fave @squigglyrick and yes there was a scarf code 😂 #sydneywritersfestival #writing #writingcommunity #happyplace #inspiration @squigglyrick
Surprise visit to #Chinadoll for lunch with my girl. Went for the banquet lunch - eyes bigger than my stomach - and it didn’t disappoint. Yummy! #eating #lunch #chinadoll #sydney #ladieswholunch #yummy #asianfood
I made it to 10.30 pm when the awesome #Thunderfox came on. #music #livemusic #gig #happy
She gets her hair and intelligence from me 😂. #dog #cute #love #pet #family
Laughed so hard at Wil Anderson at the Enmore last night. Very glad I wasn’t seated in the stalls 😂 #wilanderson #sydneycomedyfestival #comedy #culture #Australiancomedy #funny #laugh