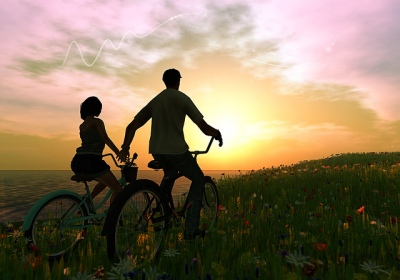 I’ve decided to be uncharacteristically nice to the old man this week.

Firstly, because he’s just banked the equity from the sale of our house into an account in MY name, (which facilitates my options of doing a runner next time he criticizes anything I don’t do), and secondly, because after an embarrassing date night recently, I’ve realized that I’d be really rubbish if I had to date again.

At this stage of my life, I can honestly say that I’d rather stick needles in my eyes than go on a date. The idea of making small talk with a view to an intimate relationship with someone I barely know, is terrifying. Imagine having to pretend to be interesting ALL THE TIME again, or even worse, having to feign an interest in your date? As for exposing the middle-aged re-sculpting of my once trim physique to someone I barely know – that’s the stuff nightmares are made of.

The old man and I are quite comfortable about letting our marriage lapse into a state of flux. Dare I say that we might be dangerously ‘content’? We try not to over-analyse our marriage like we did when we could be bothered, we just get on with it. In my experience, too much scrutiny only serves to highlight weaknesses.

Our close friends have been concerned about the welfare of our relationship since the old man fucked up our vows on our wedding day. We’ve always been that bickering couple who are merciless in our condemnation of each other publicly, the couple that makes smug couples uncomfortable. Yet some invisible symbiotic need has held us together.

Sometimes though, peer pressure gets in the way and prompts us to make an overdue effort because we think we should. We worry that maybe being ‘comfortable’ in our marriage is not a secure space to be in, that we are tempting fate by being lethargic.

So the other night we went out on what the kids call a ‘date night’. Obviously, our preference would have been to stay in and watch the second series of Game of Thrones with a bag of Pods and a good bottle of red, but we could tell the kids were worried about us.

Pretending to be a grown up with the old man always makes me nervous. There’s too much water under the bridge to pretend – we know too much about each other now. We’re at the point of beginning each other’s sentences and sitting silently together in a cafe reading the papers.

So I fucked up any chance of us sharing a romantic rendez-vous as soon as I put my sunglasses on my nose instead of my reading glasses to read the menu, much to the amusement of the other diners. I then proceeded to knock over a glass of (very expensive) sparkling water onto our (very expensive) oysters as I clumsily tried to swap them over inconspicuously – an inadvertent attempt to dilute their aphrodisiac powers, perhaps? And finally in an effort to calm my nerves, I finished my free show by pulling a tampon out of my bag instead of my lipgloss, which I always apply when I’m anxious.

Dating etiquette has always eluded me.

The old man looked at me with incredulity; I can see that some might judge that to be an unfavorable reaction, yet it was nevertheless a reaction of sorts and a vast improvement on being ignored.

I can admit that there are certain things that you do miss out on when you’ve been married for an eternity – those frissons of excitement at the first touch from someone new, for example, the physical longing, conversation, long phone calls, and did I mention ‘effort’?

And sometimes every marriage does need a little help.

I was fortunate enough to find that The Cleveland Christian Fellowship has come up with some great ideas to turn stale marriages around in its article, ’50 Dating Ideas for Married Couples’.

Here are a few of their more interesting suggestions:

Personally, if I tried any of the above, the old man would sign up to RSVP quicker than I could say ‘divorce’.

I think that marriage gets a bad press and I imagine that dating when you are middle-aged is no bed of roses either. Imagine having to close your mouth when you eat, to choose food that doesn’t give you wind, to trim your bush all year around, to think before you speak, to pretend to be interested in things that bore the pants off you.

I had to play a lot of golf when I was dating the old man – nuff said!

There’s something quite comforting about the predictability of marriage in my opinion. Is it so wrong to assume that the old man will order hot chips in a restaurant for me to eat, and that when we order dessert, he will eat the ice cream leaving me to devour the pudding?

I can still surprise him. As I ran my finger hungrily around the rim of the crème brulee dish to dig out the final remnants of cholesterol, and then began to suck them noisily off my finger, the old man was definitely surprised.

Dating for married people? Not so much.

‘I love being married. It’s so great to find that one special person you want to annoy for the rest of your life.’ (Rita Rudner)

Great Night For Date Night – Wind Down by Vanity Mirror at http://www.flickr.com

7 thoughts on “Dating for Married People”