So it wasn’t officially a holiday as such.

It was more of a mini break, if that constitutes 24 hours away from home with an ADHD teenager and the release of some pent up working mother’s guilt. 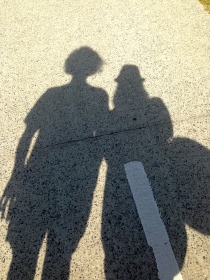 It was a final desperate attempt to find some quality time with my son amid a busy time work-wise that unfortunately always seems to coincide slap bang in the middle of the school holidays. There are only so many bribes you can invent and get away with when parenting, if you want to sleep at night. Anyway, our local shop had run out of Coco Pops and guilt-cash seemed to be walking out of my purse on a daily basis.

I eventually realised that the only way I could pull myself away from the computer and clients that were becoming more needy than my own kids, was to leave the office house completely.

Of course I had realised before our 24 hours together that the world according to Kurt was a very different place to the one the rest of us inhabit. But what I hadn’t fully appreciated before was just how astute and funny my son can be, when he is extricated from the everyday pressures and strains of living in the real world, my nagging and commonplace expectations that he finds so hard to fulfil.

You see, like a lot of parents, when I’m at home and bogged down by the day job, the housework, and failing to achieve some work/life balance, sometimes I overlook the enjoyment of relaxing and having a belly laugh with my kids.

Because Kurt has a very different view and appreciation of the world and the simplicity of the language he uses to describe his relationship with it and how it dovetails with his emotions can be highly entertaining at times.

I am ashamed to admit that I had forgotten that.

For example, when the most exclusive restaurant in a cheap hotel served perhaps THE most delicious warm bread I’ve EVER eaten and Kurt commented, ‘I ain’t eating no bread with shit in the middle – that’s just wrong.’

Or when my amazing starter arrived and the oysters were presented on large ocean salt granules and Kurt whooped rather too loudly in front of the waitress:

‘Mum, you got Chrystal Meth with your oysters!’ 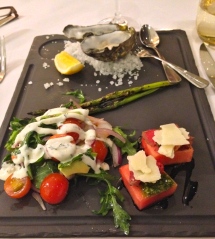 And upon finishing what was apparently the best steak he’d ever eaten, he said solemnly,’ That steak gave me an erection.’

And then there were those typically ADHD observations…

Like when I left my phone charger at home and typically Kurt became obsessed with telling me exactly how much battery I had left, EVERY MINUTE, until I am certain my hair actually started turning grey in front of him. But when I asked him at dinner how much battery I had left, he informed me that I had 50% charge remaining and when I asked him again, half an hour later, he said 52%, I was obviously puzzled and said, ‘but you said 50% half an hour ago.’ ‘

For Fucks Sake, Mum, I thought I’d finally try out that whole weird ‘rounding up thing’ you’ve been going on about in maths for years, and you still complain.’

I re-learned a lot about my son during that 24 hours, but here are some tips every parent going away with an ADHD teenager (or in fact any teenager) might want to consider: