I had a moment of clarity this week, about the whole middle-aged woman stereotype. 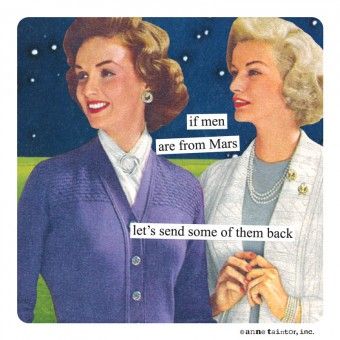 Because there are a lot of angry, tired and unfulfilled women out there in my age group, and society likes to blame their mood changes on menopause, peri-menopause and middle age.

But I think there’s a bit more to it than that.

The stereotype of the grumpy, middle-aged woman that the medical profession and men have created (and got away with for years), is unjust. Not because I’m not grumpy and psychotic, but because I believe that there’s more to it than just hormones.

Personally, under the right conditions, there is a very happy personality in my body waiting to come out. She still comes out occasionally – like in the shopping mall or when the kids are at sleepovers or with the help of a few Chardonnays and some chocolate.

So it can’t just be the hormones, can it? There’s obviously a whole bunch of other shit that sends us women over the edge too.

Perhaps we become less amiable as we get older because we become more perceptive about people – frankly, a lot of people get on our tits – so we become more selective. You see, with the confidence and wisdom of age comes the courage to stand up for our rights, to say ‘no’, to be intolerant if we want to be, to make choices about who we want to spend our time with.

Those days of stressing about our social standing in the playground are finally over and we now realize that a few really good friends is infinitely better than a room full of fuckwits – and that can be extraordinarily liberating.

Men love to blame our irrationality and mood swings on menstruation and menopause, but maybe they need to look in the mirror. The problem doesn’t just stem from the spaghetti junction of hormone over-activity, there are other issues too.

There’s also the issue of ‘having it all’ and it being too fucking much – of being overwhelmed by the day to day responsibilities, with no supportive domestic infrastructure.

The following is an example of what the old man would call an over-reaction on my part and my justification for it:

NC dared to mention to me yesterday morning that she had no clean knickers, AND needed to change her bedclothes due to fake tan marks. When I suggested she borrow some of my knickers, (which seemed like an obvious short-term solution), she used THAT tone of voice on me.

Now, I’ll let her off for not noticing that her last set of dirty bedding was still sitting in the ‘to be washed pile’ in the laundry, because I’m sure she doesn’t know where the laundry is, and because if she had known she might have chosen her attitude more carefully. Then, it is fair to say, I might not have metamorphosed into something akin to a Tyrannasaurus Rex from some bad 70’s dinosaur movie that could easily have bitten off her head and spat it out into small pieces.

And no, I wasn’t having my period or a hot flush.

Her comment came in between paid work, that I was supposed to be doing at home, fielding client calls, filling in an application for Kurt to another school, ‘writing’ deadlines, dog-walking, food planning and preparation….I could go on.

By the time we reach our forties, a lot of us women are juggling more balls than we can hope to catch, and physically we don’t have as much energy to juggle anymore anyway. Once the kids are in high school, there is an expectation to go back to work full-time; but we can’t afford the support required to provide us with a work/life balance. Cleaners earn more than the average wage and our salaries dip so disasterously while we compromised our career to raise our kids, that we can’t afford them anyway. And teenagers actually require more stalking/childcare than little kids in many ways.

Added to which we are being suffocated by the demands of a society that expects us not only to do everything, but to do it as perfectly as Gwyneth Paltrow too.

So what happens?  We find ourselves sinking into the quicksand of middle-age.

Which can make us a tad over-sensitive; even angry occasionally.

Those little outbursts over wet towels on the floor, or being too tired for sex or those times when we throw dinner over the family because they dared to comment on the quality of our cooking, are not just about fucking hormones.

They are a cry for help.

Which brings me to the men.

Firstly, in my experience middle-aged men are even more grumpy than their female counterparts. But they don’t get labelled.

Men have this habit of feigning hopelessness in everything they do other than their day job. ‘You’re so much better at it than me’ is one of the old man’s comments, said with a loving smile to soften the blow. And while we multi-task, organize and assemble and occasionally tear our hair out by the roots, they lie on the sofa waiting to be told what to do.

Why do you think we have to self-medicate with wine?

I’m not saying we don’t love the old git we said ‘I do’ to at the alter, but that doesn’t mean maintaining a good relationship is easy. Sometimes we need some distance…from everything. Sometimes the other side of the world wouldn’t be far enough. Likewise, if you find yourself in a new relationship over forty, I can imagine it must be pretty exhausting having to fake being interesting all the time at a time in your life when all you really want to do is go to bed early with a hot drink.

WE KNOW men are from Mars and Women are from Venus, but as we mature and evolve and become further drawn to the true needs of our personality which are often linked to our gender, the chasm between men and women becomes wider.

It doesn’t mean we can’t be together. We just have to adapt to each other’s evolving needs and be honest about them.

We know that a huge percentage of men, given the choice (and no repercussions), would take ‘the shed’ option with visitation rights to the kids.

What about a timetabled ‘shed’ for both partners? If women could have ‘time out’, time to reflect and recoup their energies while their partners took their share of the responsibility, who knows how that would change the symptoms of ‘menopause’.

Perhaps the stereotype would change.

3 thoughts on “Fed Up Of The Menopausal, Middle-Aged Woman Stereotype?”