In the same way that 9/11 changed the face of the US thirteen years ago, the Sydney siege changed the perceived protective mask of Australia yesterday.

Considered by the rest of the world as a sunny, safe haven, the siege reminded us Sydneysiders that no-where is safe from discrimination and terror.

Within minutes of the hostage-taker walking into that cafe in Martin Place, our city was reduced to a war zone, with large sections of the city in lock down, roads gridlocked, the haunting sound of sirens blaring and the persistent whirring of helicopters scouring the skies above.

But two inspiring actions stood out for me yesterday, amid the intense live media coverage that so vividly depicted one of the country’s worst fears being played out.

The first was the Twitter hashtag #I’ll ride with you – a simply worded gesture that symbolised the solidarity and community felt by most Australian citizens towards each other – that we protect each other, no matter what our creed or the provocation aimed at us. 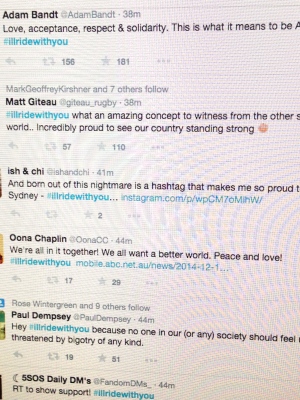 The second was the coming together of religious leaders as a united front, representative all those many different religions, in a mosque at Lakemba – again, proof that religion does not define us, like love, morality and an understanding of the intrinsic differences between right and wrong do.

Since 9/11 and the racial riots in the Sydney suburb of Cronulla nearly ten years ago, there have been persistent rumblings and antagonism towards the Muslim community in Australia, sadly, as there have been in many corners of the world.

We are not perfect as a nation.

It would be nice to say we have created a nirvana where cultures work together and are fully embracing of each other’s ideas, but sadly that is the ideal rather than always the case. Historically, ‘difference’ has created tension within societies and although what we do have in Australia is a wonderful multi-cultural patchwork that forms a society that we should be proud of, occasionally cultures and ideas clash, especially in the face of danger.

It would be reassuring to know that the tide will turn now, after the tragedy that shook us yesterday and those poor hostages caught in the crossfire in that Lindt cafe. And that the lives of those two hostages, so tragically lost, will not have been in vain. But let us hope, above all, that the events that took place yesterday make us question our own judgments, our values and the way we look at others.

Let those events make us think twice before we stereotype.

Because what came out of yesterday, and in particular what the ‘I’ll Ride With You’ Twitter campaign encapsulated, was that the majority of us are simple human beings, with simple needs for basic values. We’re not extreme, fundamentalist crazies. We may come from different cultures and have different religious beliefs, but we share the same integral values of freedom, life, respect, and love for each other.

Yesterday proved that as a community we stick together in the face of danger and refuse to let anyone destroy those shared values.