The old man and I braved a mini break last weekend.

All long relationships need a little bit of TLC occasionally.

Somehow we managed to trick some good friends into the offer of a weekend at The Block in exchange for the protection of our apartment from Kurt’s impulsive party-planning antics and crazed friends.

The old man was already ensconced on the Central Coast, pretending to be a very important and busy executive at some conference (he probably made up), so I joined him there on Friday night.

My experience of the Central Coast has been limited so far to a disastrous maiden camping trip to Woy Woy, where we fell foul of a freak storm on our first night and only realized when it was time for bed that we’d forgotten to close our tent flaps. I was woken in the morning by the old man letting the air out of my blow-up bed with a ‘let’s get the fuck out of here!’

The second occasion was when Ken, our old GPS (since retired), decided that he knew a shortcut to get us back to the Northern Beaches from the North Coast, foolishly believing that we could engage a Bond-esque swimming mode to our Honda CRV, and like God, cross water.

I found a cheap reasonably-priced B and B on Wotif.com, close to Avoca Beach, but what we actually discovered when we arrived was a mini Nirvana. 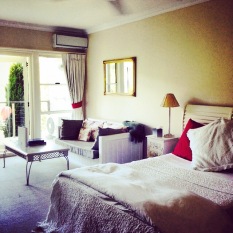 It might have been the lack of Kurt jackhammering through my eardrums, not having to cook and clean or simply being able to fully relax for the first time in a long time, but once deeply entrenched in our beautiful French-styled suite at the Avoca Valley B and B, I tasted heaven.

The old man had uncharacteristically planned some super-expensive dinner at a local hotel for Saturday night, so I found a Turkish restaurant that was recommended in Ettalong for our meal out on the Friday. Gone are the greasy Doner kebabs of old, the contemporary Turkish cuisine on offer at Saffron still served up a wealth of my old faithful and comforting dips such as Tszatsiki, Baba Ganoush (the name of my next Spoodle) and hummus, accompanied by lashings of bread. First course was followed by tapas-sized mains that included whiting lightly fried in herbs, Halloumi in vine leaves and Kofta, which satisfied the old man’s need for meat.

We were back at the B and B by 8.30pm, fully conscious of our middle-aged need to be in bed by 9.30pm to awaken fresh the next morning to get our money’s worth fully enjoy the inclusive buffet breakfast start of our weekend adventure.

And it turns out that Kilcare and Hardy’s Bay are jaw-smackingly beautiful places and right on Sydney’s doorstep.

Kilcare Beach was empty due to tsunami-high surf conditions, although there were still some fearless locals at the north end of the beach who decided to brave the tempestuous seas, while us old wrinklies enjoyed a wonderful couple of sedentary hours under the safety of our umbrella with only the Kindle and Ipod for distraction.

I missed the “are you coming for a swim now?” and “can we go now?” nags from my children. Not a bit.

By lunchtime, our bodies had somehow managed to digest the gargantuan full breakfast that was supposed to stave off hunger for the next week and we meandered back down to one of Hardy’s Bay’s cute little cafes for a feast of King Prawns.

The spirituality and natural beauty of our surroundings obviously got to us because at some point that afternoon we were feeling so relaxed and Bohemian that we decided to forgo the 5 star luxury of dinner at the local snooty hotel and dine off-piste. So, after a very public domestic of WW3 proportions in the local deli about which cheese to buy, (because the old man refused to pay the extra $4 for organic), we bought a block of cheap Brie, some dodgy-looking pate, salmon and fruit and decided to give the whole rediscovery of romance a go on the privacy of our beautiful balcony.

The candles were lit, the stars were out, the wine was chilled and even the cicadas were baying for us. The local Lemon and Myrtle digestif slipped down easily, as did my trusty bottle of Scarborough wine, secreted up from the city.

The scene was set.

Our eyes met across the smouldering candles on the table and we smiled at each other, coyly, like we were seeing each other for the first time again…

And then we yawned.

None of it was enough to stave off the tiredness of a full day on the beach. Proud that we had made it to 9.30pm, we crashed in front of a trashy movie and happily called it a night.

Whoever said middle-aged romance is dead is a liar.

4 thoughts on “Middle Aged Mini Breaks, Romance and Getting The Mojo Back In Your Marriage”