Nothing makes me laugh out loud quite as much as those text fail memes sent from, (shall we say), mature people. 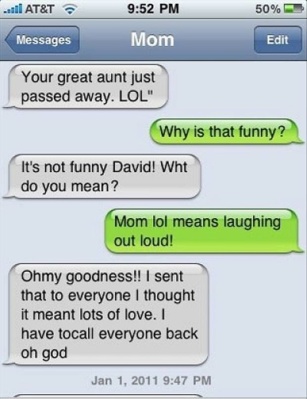 These texts demonstrate our generation’s complete lack of intuition when it comes to modern technology and if my friends are anything to go by, women are generally the worst offenders.

Through trial and error I’ve had to make myself much more tech-savvy than I feel the need or want to be, due to the technological demands of the blogging process, but I’ve done it kicking and screaming all the way.

My intuition seems to magically disappear in the face of new technology. Nothing can spoil my day quite as easily as when my phone needs to be updated.

I was one of those women who thought that LOL meant ‘lots of love’ for a good year or so, and it’s taken me at least a year to work out a) what an emoji is and b) how to insert one. I still push every button if something goes wrong on my phone or computer in the vain hope that it will miraculously self-heal.

Whenever the kids catch me mid-text on my phone, squinting and with one finger jabbing at the screen painfully slowly, they snatch it from me to put themselves out of their misery, with one of those humiliating tuts of embarrassment that Gen Y have perfected so well.

‘Hun…….’ has become the plaintive moan from my desk at least three times an evening as I try to meet deadlines, which is usually the time that technology decides to fail me.

My lack of intuition with technology will be cited as a reason for my divorce, it irritates the old man so much.

What I don’t understand is how come using modern technology seems so much more intuitive to middle-aged men than women? Neither the old man or I were brought up with computers or phones, so it must be a gender thing, like map reading and finding things in the house – an area of the brain that functions better in one gender than the other?

There are, of course, many other factors that might affect this lack of intuition in middle-aged women. Some of the symptoms of menopause can be very detrimental to the seemingly simple processes of, say, synching your Ipod.

Fear of change and progress

Text and keys that are too small for tired, old eyes

Because when technology is stimulating or visually appealing, like on Instagram and Facebook, women pick up technology much more quickly than men and it does sustain their interest.

Did you know that every month, 40 million more women than men visit Twitter, yet while 32 per cent of of men keep their mobile devices up to date, only 24 per cent of women do because they are too busy ignoring the reminders in the hope they will go away.

Generation Y is different, of course. The younger generations have developed with the aid of technology and these days babies get tablets before they can even walk. NC has no difficulty finding her way around it. She has patiently tried to give me several lessons in how to deal with those ‘FUCK IT!’ stages of technology break down, more intuitively, rather than jabbing at every key, turning the machine off and on and finally praying for a miracle.

Some are definitely easier than others.