The first term of the academic year is winding to a close, fortunately in tandem with the time the kids start to become really feral from the intense pressure of having to concentrate for a whole ten weeks. And I imagine that while some mums are dreading the next two weeks of holiday, some will be cracking open the Chardy to celebrate the break from routine.

Kurt is reaching the end of his first semester at TAFE and I can see the tiredness begin to creep in, the requirement to regiment his lifestyle so he can get up in the morning start to take its toll, and an eery sense of malaise settle over the apartment. 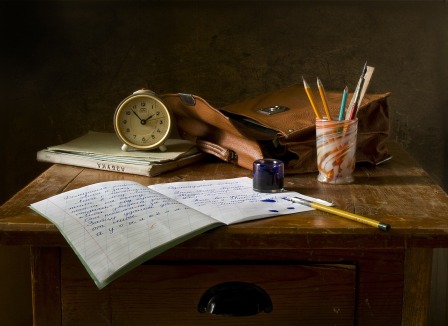 I was at a friend’s house the other day – a beautiful house set in suburbia, surrounded by moving (!) bushland – and the only object to spoil her perfect, state-of-the-art kitchen was the number of gawdy, good behaviour charts stuck to the fridge.

And in spite of being surrounded by other mums, much younger than myself, (hence, trying to be on my best behaviour and not blowing the whistle on how terrible children really are), I might have inadvertently shuddered at the memory of what having a child at school entails.

It brought me back to ‘those days’ of trying everything, (bar selling my body), to get your child through school. Not the good behaviour charts, necessarily – because we worked out very quickly that they were pretty ineffective with children such as Kurt when ADHD kids can barely wait a minute before they expect their reward – just ‘school days’ in general.

Can it really be almost a year since Kurt’s last school turned their back on him?

Not that life has become drastically less challenging since Kurt was asked to leave school, but I never fully appreciated until now, just how torturous the many rules of mainstream education can be for some kids, as well as for their parents.

Here’s what I don’t miss:

And I haven’t even mentioned selling raffle tickets for a cause you don’t give a shit about, parking or having to buy the teachers gifts…

A last look at this beautiful coastline for a while. Feeling refreshed and ready to focus for the first time this year. The power of the ocean. #holidays #onemilebeach #beautiful #relax #focus #ocean
When your camouflage for the sofa is on point. #dog #doglife #cute #neutral #camouflage #coordination #onpoint #puppy
Old farts (myself included) day trip to Elizabeth Beach. #holiday #fun #beach #Pacificpalms #friends #beautiful #old farts #daytrip
Holiday exercise regime. Walk + Pilates today, followed by several swims in the ocean and glasses of wine in the local pub. #holiday #exercise #beach #mentalhealth #fitness #wine
Chilling. Eating and drinking too much. Listening to podcasts. Holidays. #nofilter #beach #beachlife #beautiful #sand #happy #holidays #relaxing #chilling
Finally, the sun came out today and it was worth the wait. #holiday #sun #beach #happy #light