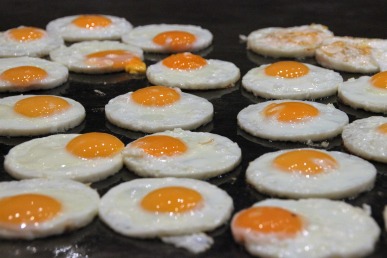 I’d never noticed before that skinny women only eat fruit at the hotel buffet breakfast, but since NC kindly (?) gave me my FitBit for Mothers Day, I’ve become much more conscious of the number of calories going into my body versus calories being burned.

Due to medical reasons pertaining to my mental health, I have to allocate a large percentage of my daily intake of calories to wine each day, so I need to watch carefully how much and what type of food I put into my mouth – especially with the added complications of middle-aged hormone fuckery. And possessing that level of control is not always easy on holiday where the ‘fuck it’ attitude kicks in the minute you step off the plane and all traces of accountability disappear.

The old man and I haven’t stayed in a hotel with inclusive breakfast for years (because…children), so this holiday has provided me with the biggest test on the food frontline since my last working lunch, when our boss used to provide enormous catered trays of sandwiches and cakes and I had to physically pinch the skin on my thighs to stop eating.

Since the early days of our marriage, the old man and I have maintained the same strategy when it comes to the hotel buffet breakfast – which is to eat as much as we can so we don’t have to pay for lunch. In hindsight, a strategy that rarely actually works.

It took me the first three days of this holiday to work out my buffet breakfast plan for the rest of the week, after a few false starts where all my self-coaching on the plane fell apart as soon as I approached the breakfast area and my natural mindset of Labrador set in. Most women will recognize that it is almost impossible to resist a line of FREE food that you haven’t had to either plan, cook or shop for – particularly one which offers a smorgasbord of food you normally deny yourself, the morning after that first night of holiday drinking – another of those traps you swear you won’t fall into until Happy Hour swings around at 4pm and the lure of half-price cocktails proves impossible to ignore.

I’m being hard on myself. I did show some self-control in my choice of fruit as my starter, (rather than the huge bowl of Coco Pops I would normally berate Kurt for), before I headed for the full, cholesterol breakfast, finished off by toast, no Nutella, and washed down with three cups of Earl Grey.

Only four mini chocolate croissants made their way back to our room.

I’m not sure why we live this lie each hotel holiday that the buffet breakfast will suffice until dinner, because inevitably the ‘FEED ME!’ belly grumbles always kick in around 1pm as those first wafts of lunch make their way around the pool.

But today I demonstrated REAL restraint. I accepted that after three hours of hard work lying on a sunbed, I have a right to feel a little peckish around lunchtime, and I refuse to beat myself up about it. I am aware that lifestyle changes – particularly in regard to diets – need to be permanent, rather than half-hearted efforts here and there. And so I became a responsible eater this morning – mature enough to look beyond the sausages and potato croquettes, to think about the bigger picture of my health and weight beyond this week of testing temptation. And frankly, the bacon and eggs were enough.