One thing that won’t make my bucket list – and I can say this with a certainty – is going to an outdoor music festival again. While I have the utmost respect for those fifty-somethings that decide that outdoor music festivals such as Glastonbury will make them feel young again, the idea that trawling through mud and the great unwashed (for even a couple of days) is fun, is completely unfathomable to me. 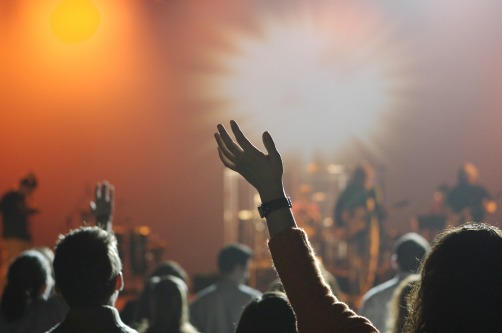 Looking through the photos of the fashionistas at Glastonbury and Coachella and the Australian equivalent, Splendor, I rather see myself as Sienna Miller, colored gum boots, cut-off shorts and cowboy hat, swilling my beer from a bottle as I watch bands that I have only a vague chance of recognizing – and I’ll admit that I’ve been tempted.

And then I remember the toilet situation.

To be honest, the only time I’ve come close to venturing anywhere close to an outdoor music event in the past ten years was at Opera in the Domain last year – the only reasons being the toilets at the local pub and its duration of only two hours. No sinking in mud, so crowd-surfing, no old man on my shoulders so that he could see, while I sniffed the armpits of the tall guy in front of me, and as we sat in the semi-comfort of our beach chairs, gourmet picnic spread in front of us, not an aging hippie in sight, I could relax in the knowledge that we were going home to our own beds that night.

The mosh pit idea is an interesting concept, whereby you pay the same money to stand amongst the crazies forced into the public by government cuts, and unless you give up your pre-drinks, there is no guarantee that you will be any closer to the band. I run a risk assessment before I buy tickets to any gig these days and my strict rules include a capacity no larger than two thousand and ample seating with clear exits to bathrooms. After a horrendous experience in the Coldplay mosh pit a few years ago, where the tallest man in Australia, (who happened to be visiting Sydney at the time), stood in front of me for the duration of Chris’ singing, thereby blocking my exit to the bathroom and the bar and pushing me in front of the path of a giant out-of-control balloon, there’s no going back.

We are not a family that roughs it or camps. You might think that from a financial perspective, the idea would be the old man’s idea of heaven, but even before children, the concept of communal bathrooms, roaming wildlife, having to cook for ourselves on holiday and eating off plastic crockery seemed very unappealing.

I am still scarred from Brownie camps with latrines and my therapist continues to work with me on long-term issues relating to a school biology field trip to the Lake District, that my brain has completely blocked out.

The one and only time we did go camping, I was awoken by the old man on the first morning, the tent and children already packed away in the car, as he released the valve on my airbed.

‘We can tick off camping,’ he said through gritted teeth. The tent and hundreds of dollars of equipment were on Gumtree that same week.

You can “glamp” at Glastonbury now, and there is even a pop-up hotel…OR… you can watch the festival on television from the comfort of your sofa. If anyone has seen the movie, “Bridget Jones Baby”, don’t  think that her stay in a safari tent had anything to do with fun or recapturing her youth: what it had, was everything to do with McDreamy in the vicinity, and even I might camp for a piece of that. Kind of reminds me of how much golf I used to play when the old man and I were courting…  Starting at around $1400, the tents are hardly competitively priced when you consider the four solid walls to be found in hotels to segregate you from the hippie riff raff, the offer of WIFI and the kettle and tea bags in your room.

No, Glastonbury will not be on my bucket list. It will be added to my ‘I’d rather fucking die right now’ list, along with skydiving, ice bars and swimming with sharks.

9 thoughts on “Why Glastonbury Is Not On My Bucket List”